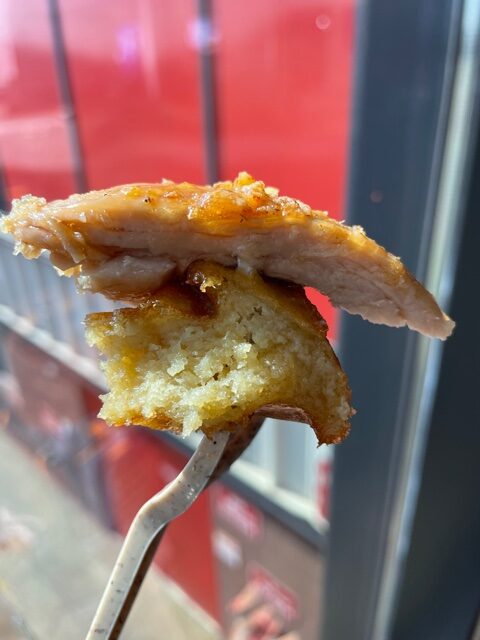 If you travel, you spend a lot of time in airports.  While you are in said airport, you may get hungry.  Now airports have been notorious for horrible and overpriced food but thank goodness that is changing.  In our ‘Best Airport Food I Ever Ate’ category we explore airport food all over the world… the good, the bad and the ugly.

Our first entry is from Atlanta Hartsfield-Jackson International Airport, better known as ATL.  Chicken + Beer is located on Concourse D/Gate D5 and is owned by Chris Bridges better known as famous rapper Ludacris.  Although the restaurant is named after Luda’s 2003 double-platinum album Chicken-n-Beer one of the stars of it’s menu is chicken and waffles.

Chicken and waffles have been a craze for decades.  Roscoe’s Chicken and Waffles in California is probably one of the most famous restaurants serving the unlikely pair.  I spent many childhood Saturdays throughout the 70s eating at Wells Restaurant in Harlem, New York – the original home of chicken and waffles.  When I got to Chicken + Beer all I could think was – this better be good!

The service was very attentive and all of the staff quite hospitable and were smiling!  It’s so nice to see hospitality staff smiling these days… it’s contagious!  The restaurant was clean and did not have that smell of old food like so many other airport restaurants. I sat at the bar and ordered the chicken (dark meat) and waffles to go.  I also ordered the 3 wings and a biscuit to go.

I arrived at my gate and opened the chicken and waffles.  I was a bit put off by the appearance of the chicken, some of the batter seemed to have slid off the chicken leaving exposed meat.  But, quite frankly, I’ve seen much worse.  I cut a piece of the chicken and it was moist.  The first bite was heaven.  Well seasoned, tender and done all the way to the bone (undercooked chicken gives me the heebie-jeebies).  I went in for a bite of the waffle which I had already drenched in syrup.  This was a Belgian style waffle. Crispy on the outside, light and airy on the inside and with a little butter and syrup, was delicious.  I was unable to finish it all because it is a very generous portion.

Next was the 3 wings and a biscuit.  The wings seemed to have suffered the same batter fate as the earlier chicken but was just as well seasoned, juicy and done to the bone.  BONUS – they give you the whole wing, not just a winglet! The biscuit was just what a southern biscuit should be – heavy and dense but light and airy.  It is a difficult combination to master and this one was done pretty well.

I truly enjoyed my experience at Chicken + Beer and will go back since I’m flying through ATL all the time.  You should definitely check them out.  On a scale of 1 to 5 I give it 4.9 stars.  I took off .1 star for the batter slippage. 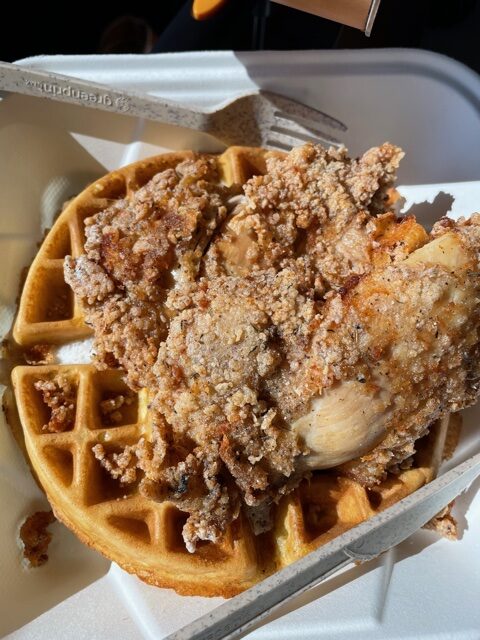